A WOMAN MODELS a green and mauve dress (which cost 7 clothing coupons), designed by Norman Hartnell. The model is standing on a windy rooftop in Bloomsbury, London. Senate House, the headquarters of the Ministry of Information, is clearly visible in the left of the frame. Image Copyright: © IWM. IWM catalogue reference D 14820. Original Source: http://www.iwm.org.uk/collections/item/object/205192912.

IT’S HARD TO BELIEVE that the photograph was taken in the middle of the Second World War.

And it’s hard to think that the woman in the printed dress was modelling a new design by British fashion designer Norman Hartnett.

Norman (later Sir Norman) Hartnell created innovative fashion designs during the 1920s and for the next fifty years.

His clients ranged from the British Royal Family – including the Coronation Dress worn by Queen Elizabeth -to ordinary British women. (1)

Senate House – part of the University of London – was the British capital’s first skyscraper and dates from the late 1930s. (2)

It was the home of the Ministry of Information from Britain’s entry into the Second World War until the department was disbanded in 1946. During that time it was responsible for many images designed to boost morale as well as for censoring material. (3)

It is said that Eric Blair – better known as author George Orwell – based the Minstry of Truth in his novel ‘1984’ on Senate House and the work carried out within.

In the book the central character Winston Smith works as a minor civil servant revising history by rewriting and correcting published material to match the ever-changing demands of the English Socialist Party (INGSOC or ‘the Party’) of which Winston is a member. In reality Blair’s wife Eileen worked in the building during the war. (4) (5)

In recognition of this the building was used as Winston Smith’s workplace in the 1984 film version of Orwell’s novel. (6)

Evelyn Waugh, another British writer used Senate House as the location for his book ‘Put Out More Flags’.

Published in 1942, the building is described as keeping ‘all the secrets of all the services… hidden in that gross mass of masonry’.

In his 1943 novel ‘Ministry of Fear’ Graham Greene described the building as ‘a high heartless building’ with ‘windows always open for fear of blast and the cold winds whistle in’.

To add to Senate House’s notoriety, it has been suggested that it survived the destruction inflicted by the Luftwaffe because it was ear-marked as a ready-made and significant headquarters building in the German plans to administer occupied Britain. (7)

Given the accuracy of aerial bombing by both sides in the early war years – plans for the invasion of Britain were shelved after the German attack on the Soviet Union in 1941 – this seems unlikely.

The image was made by an unidentified Mnistry of Information photographer for a series on women’s fashion.

To see more images in the series, go to https://www.iwm.org.uk/collections and search for
‘ Utility clothes ‘.

AN OIL ON CANVAS painting by Alfred Reginald Thomson, showing Charity Anne Bick GM, the youngest woman Civil Defence worker to be decorated with the George Medal, 1941. She is shown on a bicycle, wearing a black ARP helmet together with both her Despatch Rider’s armband and her George Medal. IWM catalogue reference ART LD 1207. Image Copyright: © IWM. Original source: http://www.iwm.org.uk/collections/item/object/26209

CHARITY BICK was fourteen when during a heavy air raid on West Bromwich in the West Midlands – at the time an industrial part of England.

She had become an Air Raid Protection (ARP) despatch rider by lying about her age, claiming to be sixteen. (1)

During the raid on 19 November 1940 (2) she and her father attempted to neutralise a German incendiary bomb which was lodged in the roofspace of a local shop.

When she discovered that the standard stirrup pump was not working, she successfully doused the fire with handfuls of water.

Then while she was leaving, the damaged roof supports gave way and she fell into the shop below.

Luckily she had only minor injuries and she and father made their way to the local Air Raid Protection (ARP) Post, where her father was the Post Warden.

As they arrived high-explosive bombs were falling and houses nearby were hit.

This and similar situations were to be reported from the (local) ARP post to a (central) ARP Control Room that would prioritise and co-ordinate fire and rescue efforts.

With all the other ARP wardens elsewhere she borrowed a bicycle and finding her way blocked or having to shelter from explosions and falling debris made repeated attempts to reach the Control Room.

She was to make a number journeys between the ARP Post and the Control Room as the raid continued.

She was awarded the George Medal for her actions.

At the time this was primarily awarded to civilians who performed ‘acts of great bravery’ during enemy bombing as well as similar deeds in other circumstances.

Miss Bick… did very valuable work and released other Wardens for duty. She displayed outstanding courage and coolness in very trying circumstances.

After the incident she was presented with a new bicycle for her ARP duties.

Apparently Dispatch Riders with the Auxiliary Fire Service (AFS) were given a cycle on joining the service. (5)

Charity Bick would later join the Royal Air Force, serving until 1962 when she retired as a Warrant Officer with a total of 22 years service.

In 2002 the West Bromwich Local History Society erected a commerative plaque in her honour. (10) (11)

The painting was made by Alfred Reginald Thomson, RA for the War Artists Advisory Committee. A trained commercial artist, Thomson was also deaf from birth.

He would become the official RAF War Artist between 1940 and 1944. After the war he continued to paint a variety of commissions including murals for London’s Science Museum. (12) (13)

IN A WORLD of 24-hour news, instant information through the computers we all carry in our pockets, when we can sit at home with do-it-yourself DNA testing-kits to find people we may be related to and yet never seen, where we leave electronic contrails through cyberspace and miles of video images as we walk through our cities it seems impossible.

Even in post-war Paris when the plaques commemorating those who had died in the Liberation of Paris in August 1944 started appearing – complete with names and often details of occupation or how they met their deaths – it must have been strange.

Today, seventy-five years later, when books have been written – the excellent ‘Ici est Tombé‘ by author Phillipe Castetbon and photographer François Rousseau which focuses on plaques relating to 26 men and their lives to the point when they died in the Liberation of Paris springs to mind – and a number of curious visitors have taken the time to write blog posts (1) – it is heart breaking to realise that a man who died in an epic battle in a physically compact European city still is unidentified. 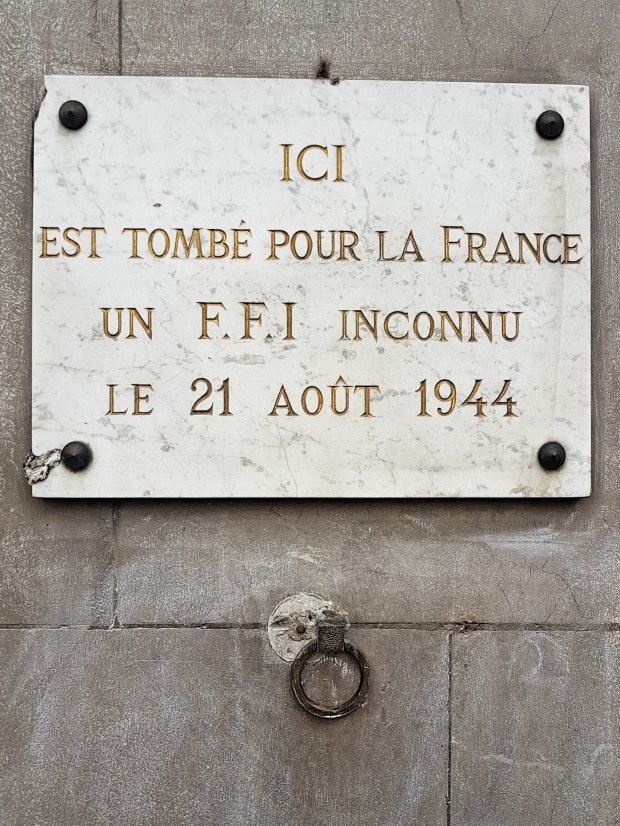 The plaque is outside a branch of the Banque de France at the junction of Rue de Sèvres and Boulevard Raspail and across the road from Hôtel Lutetia.

The hotel – built in 1910 as Art Nouveau started to morph into what would become Art Deco and the only Grand hotel on the Left Bank – was one of the many places requisitioned by the occupying German forces after June 1940. (2)

During the war it housed the headquarters of the Abwehr, the German military’s intelligence arm and in the immediate aftermath of the conflict became a reception centre for displaced persons and returning prisoners – many of whom had been held in concentration camps. (3) (4)

In August 1944 the people of Paris had seen the Allies land and fight their way across France.

But the city was to be by-passed by the advancing troops as they planned to dash into Germany.

Charles De Gaulle, heading up the Free French government in exile in London and Henry Tanguy – known as ‘Colonel Henri Rol-Tanguy’ a Communist and head of the FFI (French Forces of the Interior) resistance groups in Paris and the surrounding area – saw their chance, albeit differently,

On 18 August Rol-Tanguy mobilised his forces to rise up against the German occupiers.

An initial order from De Gaulle telling his supporters not to rebel was countermanded the next day.

Some 3000 members of the Paris police force – who with Metro workers had taken seperate strike action four days earlier – occupied their headquarters near Notre Dame cathedral.

Over the next week almost 170 police officers (5) – together with members of the Résistance – would die in skirmishes with the thousands of German troops stationed in the capital.

Although an initial ceasefire was agreed on 20 August, many resistants did not accept this and continued their attacks.

It seems likely that the unknown man commemorated on the plaque was one of these, perhaps shot in a skirmish with soldiers across the road at the Lutetia.

As the days past and the fighting intensified, barricades would be built to protect areas of Paris from German attack.

Watching events unfold, De Gaulle ordered General Philippe Leclerc and the 2eme DB (French 2nd Armoured Division) under his command to slip away from the American force they were attached to and make for Paris on 23 August.

The first troops of 2eme DB entered the capital late in the evening of 24 August.

De Gaulle arrived the next day in as Leclerc and Rol-Tanguy accepted the surrender of the German forces from General der Infanterie Dietrich von Choltitz, the Military Governor of Paris. 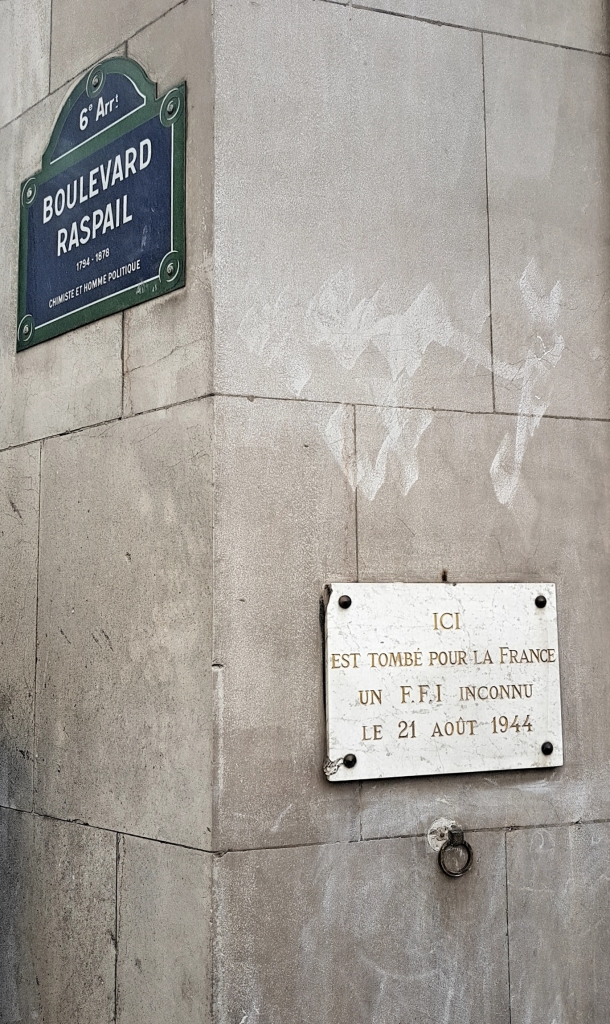 Another view of plaque at the junction of Boulevard Raspail and Rue de Sèvres, Image Copyright © R Maddox 2019.

Somewhere in an official archive, in a private diary, in a bundle of letters at the back of a bedroom drawer or pencilled on the back of a creased photograph could be the clues that could shed light on who this man was.

I have passed the plaque – the only one I know of dedicated to an individual member of the Rédistance killed during the August uprising – that bears no name – infrequently many times over many, many years.

Each time as I draw near I always expect to find a new plaque giving this man his name – and in a way his life – back.

But perhaps in some strange way it is good that this plaque has no name.

Because as it stands it forces us all to think about who this man could be and who he might have become, rather than how his life ended.

I also know that when I stand and gaze at it or point a camera at it and walk away – something I have done many times – and look back I will see someone glance up from their mobile ‘phone, ot slow their city pace and for a moment of stop and stare at the plaque.

And perhaps reflect on a life summed up in so few words.