IN THE EARLY HOURS OF 31 JULY 1917 THE TWO-WEEK BARRAGE OF A THOUSAND GUNS AND FOUR AND A HALF MILLION SHELLS RUMBLED INTO SILENCE.

The attack on Pilckhem Ridge would mark the start of the Third Battle of Ypres (perhaps better known as ‘Passenchdaele’). The British had wanted to carry out the operation the previous summer, before they had joined French in the battle of the Somme – a battle that would leave perhaps a million from all sides dead.

PRIVATE ARTHUR ROBERTS’ DIARY with his picture, taken between February and June 1917 while serving with the King’s Own Scottish Borderers in the First World War Gallery at IWM London. Image © Rmaddox 2018.

Soon the whistles would blow in the British and Commonwealth trenches and the Pilckhem attack – supported by French troops – would begin.

Soldiers would move towards the well-established German lines with the aim of breaking through and advancing towards Bruges.

They would be supported by the latest equipment and tactics – tanks and aircraft, used not just for scouting (aerial reconnaissance) and anti-scouting missions but also directly supporting the army by bombing the enemy.

The German positions would be pulverised and any remaining troops too demoralised to respond.

But no plan ever survives contact with the enemy – You can only control your own forces.

Not those of the enemy and not the weather.

That afternoon the rain fell.

Over the coming days and weeks the whole battleground would be turned INTO an ocean of fetid sucking mud punctured by mast-like splintered trees.

The enduring image of the whole Passchendaele operation – perhaps the whole war – would be formed. 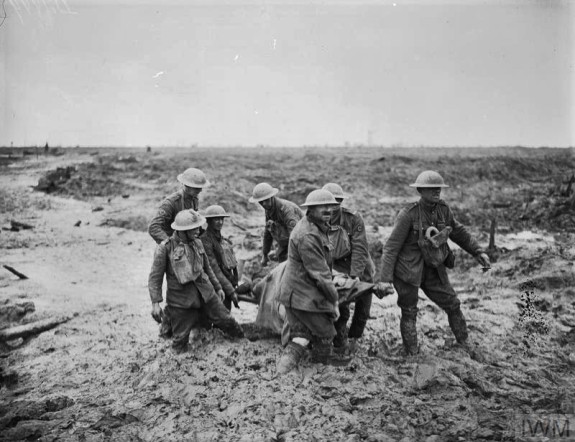 Among the thousands of troops involved was Private Arthur Roberts and his diary and photograph can be found on display in the First World War Gallery at IWM London.

Of Trinidadian heritage, born in Bristol, England in 1897 to David (a ship’s steward) and his wife Laura (née Dann), Arthur would grow up in the Tradeston area of Glasgow on the south side of the River Clyde. (2)

Later he would be apprenticed in the Harland and Wolff shipyards at nearby Govan. (3)

By January 1916 he was serving British army as a member of No. 883 Area Employment Company, Labour Corps. (4)

These units provided support personnel with specialist skills that could be used in the military ‘behind the lines’ such as butchers, telephone operators, police or those with salvage experience and many more.(5)

This appears to have been a ‘holding’ position as he joins the Kings Own Scottish Borders on 3 February 1917. He arrived in France three months later, transferring to 2 Battalion Royal Scots Fusiliers in June 1917.(6)

But the British endured 27,000 men killed, wounded or missing – according to the Commonwealth War Graves Commission most of those lost have no known grave. (7)

On 1 July 1916 – the first day of the Battle of the Somme – nine Victoria Crosses were won by British and Commonwealth personnel.(11)

For actions on the opening day of the Battle of Passchendaele fourteen copies of the same medal – the highest award for valour in the face of the enemy – would be awarded. (12)

Arthur would survive the whole war. But he became a casualty on two occasions when he was gassed 19 September 1917, was diagnosed with trench foot – a serious condition that affects the nerves, blood vessels and muscles of the foot and is caused by severe cold, wet and insanitary conditions.  He was evacuated for treatment in the UK. (13) (14)

At some point in his career he was also accused of deliberately destroying a pair of boots. Lack of evidence prevented him from being court-martialed on a charge of ‘wilfully destroying property without orders’. (15) If convicted he would have faced a period of  imprisonment with hard-labour.(16)

Following his discharge in December 1919 he wrote:

‘I have filled many breaches.

The strange thing is that according to my discharge, my military qualifications are ‘Nil”.

Arthur would return to Glasgow and spend the rest of his working as a maritime electrical engineer.

His diary was discovered twenty years later in an attic, together with paintings and photographs created by him. (18)

Much of the information for this post has come from IWM’s ‘Lives of the First World War’ online project.

To learn more about the lives of many of the almost 8,000,000 British and Commonwealth men and women who served during the conflict or to contribute to the project, visit https://livesofthefirstworldwar.org/

ON 13 OCTOBER 1968 PEOPLE POINTED UP AT THE SMALL DOMED ROOM ATOP OF WHAT IS NOW IWM LONDON.

But unlike today they were not marvelling at the ‘Weeping Window’ art installation tumbling to the ground.

Because on that Sunday the Dome was ablaze.

Originally designed as the chapel for the Bethlem Royal Hospital – also known as ‘Bedlam’ – the little galleried room dates from 1846 when improvements were made to the hospital. (1)

It would later serve as the Imperial War Museum’s Reading Room for the Departments of Documents and Printed Books.

Even today it appears in television documentaries when documents held in IWM’s collection are being shown and discussed. 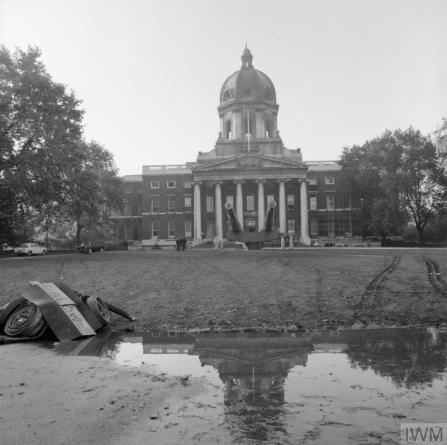 The windowless Dome at the Imperial War Museum building at Lambeth Road, London on the 14 October 1968. In the foreground are rolled-up fire hoses lie and  on the grass the tracks of the attending fire engines can be seen. Image copyright: © IWM. IWM catalogue reference MH 10486. Original Source: http://www.iwm.org.uk/collections/item/object/205191016

The fire was deliberately started by 20-year old Timothy Daly as a protest at what he saw was the exposure of children to militarism. His actions caused considerable damage – valued at the time at £200,000 – to the fabric of the room as well as the loss of reference material. (2)

At the conclusion of his trial at London’s Central Criminal court – the Old Bailey – in January 1969 Daly was sentenced to four years in prison for the attack.

It would be 1975 before the Dome reopened again to researchers.

According to a catalogue description of a Metropolitan Police record held at the UK National Archives Mr Daly was ‘later seen acting suspiciously at the RAF Museum, Hendon, London on 13 December 1972’.

However as the National Archives catalogue description for this item makes clear ‘the naming of a defendant within this catalogue does not imply guilt’. (4)

The museum would be attacked once more in the early hours of 17 September 1992 when an incendiary device started a small fire in the basement galleries of IWM London. This time the fire was put out by museum staff.

The museum was one of three tourist well-known venues apparently targeted by the Provisional Irish Republican Army (PIRA). (5)

The Weeping Window sculpture by artist Paul Cummins and designer Tom Piper can be seen at IWM London until 18 November 2018. More details can be found at https://www.iwm.org.uk/events/poppies-weeping-window

WHAT LINKS A Red Cross prisoner of war parcel with an engagement ring and an old and cracked bar of commercially-made hand soap?

They are all associated with French soldier Yves Jaulmes and his wife Evelyn and have been donated to Imperial War Museum. 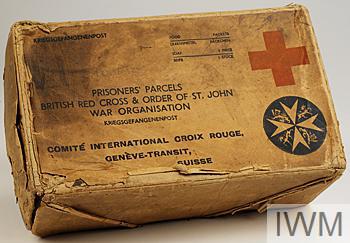 This package was given to Yves Jaulmes, an anti-tank gunner serving with Free French Forces in Tunisia when he was captured during February 1943. Held at a camp in Tunis before being moved to Palermo and then Campo 66 near Naples in Italy.(2)(3)

Here he was given the parcel – which contained a variety of food stuffs as well as cigarettes – on 26 April 1943.

By June 1943 he was back in France and like thousands of other captured French soldiers was demobilised and returned to civilian life, possibly as part of the Service du Travail Obligatoire (STO – the Obligatory Work Service programme).

This scheme – under which thousands of French men and women were first encouraged with the inducement of better rations and then deported to do work in Germany for the German war effort – was sanctioned by the Vichy government in September 1942.

As a further inducement the German government promised that a French prisoner of war would be released for every three workers sent to Germany before regulations were brought in making all males between the ages of 20 and 23 liable to be sent to Germany. Women also went to Germany but because of the risk of public protest to what was already an unpopular policy, most – if not all – of those who did go and work in Germany did so voluntarily.

At some point while in France he met Evelyn Pearl who would become his wife. Evelyn was born in France to English parents and had dual nationality.

After the Fall of France in June 1940 her father  – who had served in the Intelligence Corps during the First World War – escaped a month later to England via Spain. Safely there he enlisted in the British Army. Evelyn and her mother would not see him for another four years.

Her mother was arrested as an enemy alien in December 1940 and interned (together with around 3,000 other women) in a former French army barracks at Besançon. She was released four months later because of ill health.

Evelyn worked as a secretary in a technical school in Paris and was also part of a Résistance cell. She managed to thwart the efforts of the STO office in attempting to send individuals to Germany.

In October 1943 she became engaged to Yves Jaulmes. Her engagement ring – which was decorated with blue, white and red stones – was made from small gold items hidden by her mother. It has no hallmark as the jeweller didn’t wish to draw attention to the fact that he had made what was considered a pro-French item. During this time she and Yves visited an evading American airman – neither he nor the family sheltering him could speak the others language – who was eventually returned to England via an escape line out of the country. (5)

The couple were married in 1946 after having moved to Britain.

The small bar of commercially-produced soap – less than 3 inches long and 2 inches wide – was bought by Yves Jaulmes in Paris during 1944. Produced by the US Colgate-Palmolive Company, this block of soap represented the allowance for an individual for a month.

If you are interested in donating an item to Imperial War Museums please see the link below.
https://www.iwm.org.uk/collections/managing/offer-material/how-to-offer