BORN IN HIGHBURY, North London and educated in Swanage and Derbyshire, Rupert Norman Shephard would become a draughtsman and towards the end of the war an official War Artist.

In a three-part oral history online interview recorded in 1978 with IWM’s James Mellen (1) (who also interviewed a number of other artists active during the Second World War) he describes his early life, his artistic influences and how he would sketch workers on the factory floor after his day job as a draughtsman.

Second World War First Aid Post, with Three St John Ambulance Brigade Men in a Domestic Setting by Rupert Shephard, oil on canvas, 1940. Collection of the Museum of the Order of St John.  Image from https://artuk.org/discover/artworks/first-aid-post-with-three-st-john-ambulance-brigade-men-in-a-domestic-interior-135514/search/venue:museum-of-the-order-of-st-john-6474/sort_by/object.lifecycle.creation.date.earliest/order/asc/page/4

At one time Shephard was a jig and engineering tool draughtsman at EMI in Hayes, Middlesex when the factory was engaged on war work manufacturing things like their Capacitance Altimeter fitted to the RAF bomber force for blind landings and low-level anti-shipping torpedo attacks (2).

The pressures of work and his artistic endeavours caused him a breakdown in 1943.

This however enabled him to concentrate on a new career as an official war artist, selling work to the War Artists Advisory Committee.

Established by the Ministry of Information part of its purpose was to ‘to draw up a list of artists qualified to record the war at home and abroad. … to advise on the selection of artists on this list for war purposes and on the arrangements for their employment’.

Approximately half of the 5,570 pieces purchased by the Committee are in the collection of the Imperial War Museums (3).

Shephard painted industrial scenes in Britain and amongst over work made a series of five paintings entitled ‘Women in Industry’ with a series in 1943 of tasks in traditional factory settings.

Papers in the IWM Collection indicate that he received 30 guineas – a guinea being one pound and one shilling sterling, with 20 shillings making a pound – for the ‘Women in Industry’ series (4).

He also painted a number of works showing workers in both aircraft manufacturing and repair factories.

A painting entitled ‘A Nose section after Repair: Girls fitting supports to take the bomb aimer’s window’ – was purchased for 15 guineas on its own. It shows female workers fitting the seal of the bomb aimers’ window to the the bottom of the nose blister of a  Lancaster bomber.

It is possible that this was at the A V Roe (Avro – makers of the Lancaster) repair facility at RAF Bracebridge Heath, a former First World War airfield near Lincoln (5) (6) .

On one of the images of Lancasters under repair by Shephard in the RAF Museum’s art collection the No. 50 Squadron RAF code ‘VN’ can be seen.

The painting below (‘Filming a Practice Launching of a Rubber Dinghy in a Training Pond’ in the Imperial War Museums IWM Catalogue LD 4647) was made in May 1944.

It appears to show an instructional training film for Lancaster crews being made. Of interest is the fact that the bomber is incomplete (missing its tail unit) and also the line of figures behind the camera crew who appear to be operating a wave-making device. 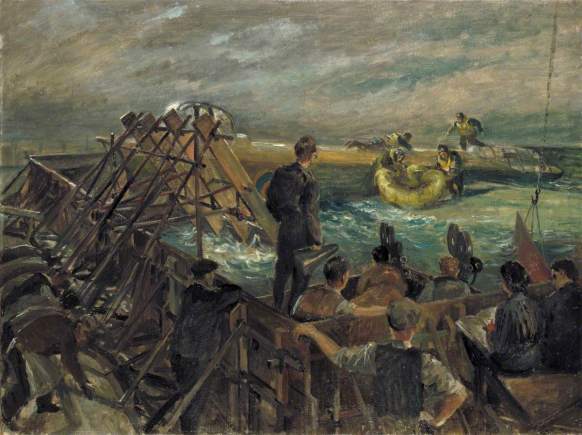 After the war Rupert married and moved to South Africa with his South African wife where he continued to paint. Returning to the UK in 1962 he turned his attention to producing finely textured lino cut prints, often of London scenes.

His son Ben, a military and medical historian, worked on the well-known 1973 British television documentary series ‘The World at War’ (7).