RAILWAY STATIONS ARE ALWAYS BUSY with people rushing to get trains or rushing away from the station.

Near Platform 8 at Victoria Station, London  is a plaque honouring the Unknown Soldier and each year at 8pm on 10 November, the Western Front Association holds a memorial ceremony.

Placed there by the WFA, the simple plaque framed in English oak was unveiled in November 1998 by Frank Sumpter, who served as a Private in 1/5th (City of London) London Regiment during World War 1 and was a pall bearer for the Unknown Warrior.

He died in July 1999 and spent the last few years of his life as a Chelsea Pensioner.

THIS IS THE STORY of the first civilian to be executed in Paris (but not in France) during the German Occupation during the Second World War.

It is the start of a line that will number thousands of men and women from many walks of life, urban and rural, individuals, groups and whole communities, such as the 642 men, women and children killed in Oradour-sur-Glane near Limoges.

Like many things connected with the Occupation, things are not clear – even today, after 77 years.

The basic story appears to be that between 7pm and 9pm on the 10th November, 1940, the day before the anniversary of the 1918 Armistice – and the first under German control – a group of seven young men are returning from a wedding three days before. Although not particularly late, the streets are dark and lighting subdued.

Paris is under German military control.

Some say that the newly-weds Marcelle Dogimont and his wife are in the group.

The scene is easy to imagine. Jacques Bonsergent, a tall 28 year-old ex-soldier and engineer and his friends are talking and perhaps laughing. Maybe one or two of them are a little shaky on their feet.

Tired but happy, the group moves erratically, perhaps stopping as one member trips or stumbles…

Near Gare Saint-Lazare railway station they encounter some off-duty German soldiers walking in the opposite direction.  Some reports suggest that the Germans are drunk and that one makes an attempt to put his arm around the waist of the new bride.

What is known is that a scuffle breaks out and a soldier is punched, perhaps knocked to the ground. Bonsergent tells his friends to go home and calms the situation and walks on alone. He doesn’t get far.

He’s pursued and minutes later caught. He is wearing a coat similar to the person who is supposed to have struck the blow. Protesting his innocence he tries to walk away. He is angrily roughed up, taken to the nearby Hotel du Terminus and questioned.

Who are his friends? Where do they live? Is this the start of the anticipated anti-German campaign?

In the days leading up to the traditional 11 November commemorations, the German authorities have banned all commemorative events. Aware of the long tradition of protests, student in particular have been warned not to protest.

Bonsergent is uncooperative and the German quickly transfer him to the notorious Cherche-Midi prison in the south of Paris.

On the 11 November between 3,000 and 5,000 people defy the authorities and demonstrate at the Arc de Triomphe, the resting place of France’s Unknown Soldier.

Shaken by the protest the Germans unleash a vicious response. Many young people are arrested. Many more injured.

It is to become the first large-scale show of resistance.

Back at the prison, Jacques is told that the Germans know he did not assault anyone and ask him to save himself by just delivering up his friends.

He refuses to do so and is charged with ‘an act of violence against a member of the German army’ – although a civilian he is to be tried by a military tribunal.

When the trial comes it lasts a day and on 5th December the verdict is announced: Bonsergent is guilty and the sentence is death.

His appeal for clemency is rejected. He continues to refuse to name those with him.

News of his imprisonment spreads and the public opinion is outraged.

The new head of the Vichy government, Marshal Philippe Pétain refuses to go to Paris and receive the ‘gift’ of the remains of Napoleon II, which have been sent on Hitler’s orders from Vienna on a special armoured train with senior Wehrmacht officers acting as escorts.

Napoleon II’s return has been timed to coincide with the centenary of his father’s remains (Napoleon Bonaparte) arriving in Paris from St Helena.

Hitler is outraged by Pétain’s behaviour, calling it ‘unspeakable infamy’.

Under pressure from the Führer and in the wake of the violent 11th November demonstration, General Otto von Stülpnagel, the German Military Governor, is determined to make an example of Bonsergent.

Early morning on 23 December 1940 Bonsergent is executed near the French Army fort in the Bois de Vincennes in the east of Paris and his death promulgated in an official poster that morning. 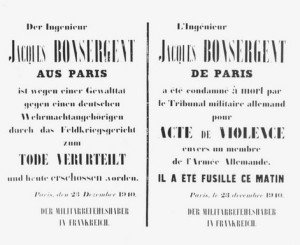 Parisians will see many more before they are liberated in August 1944.

Eight months and 2.5 kilometres away Alfons Moser a German naval cadet is getting ready to travel to work from near Montmartre.

Stepping on to a metro train at around 8 am on 21 August 1941, he doesn’t notice the small pistol in a pocket of one of the four Résistance men in the crowd pushing towards the train.

Shot in the doorway of the train from behind Moser dies from two bullets to the lung, the Résistance men escape.

The gunman is 22 year old Pierre Georges who will adopt the nom de guerre of ‘Colonel Fabien’. He will die three years later.

But as usual things are not that simple.

Tyszelman had been arrested after a protest on 14 August 1941.

On 27 August 1941 three Communists were executed by guillotine with three more the next day.

Over the next few months more than 500 French people would be executed in reprisals against attacks on the German military. 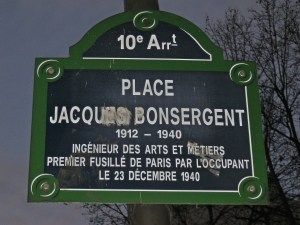 So if you find yourself at the Place Jacques Bonsergent, the Metro station named after him, or outside 3, Boulevard Magenta, where he lived, spare a thought for a man who was, literally, in the wrong place at the wrong time.

Image: An Avro Lancaster B Mark III, ED724 ‘PM-M’, of No. 103 Squadron RAF pauses on the flarepath at Elsham Wolds, Lincolnshire, before taking off for a raid on Duisburg, Germany, during the Battle of the Ruhr. (Image created by Pilot Officer Miller – RAF official photographer) © IWM (CH 9029)

MUCH HAS BEEN WRITTEN about the RAF bombing campaign over Europe, the individual missions, the pilots and aircrew on both sides… less so about the cooks,  fitters, admin staff, riggers, NAAFI staff, armourers, telephonists, parachute packers, MT drivers and the many others who helped the get the aircraft airborne.

And seventy-two years ago today more than seven hundred RAF heavy bombers and more than five hundred bombers from the USAAF were attacking Dresden in four seperate attacks over two days.

At the end of the runway
The WAAF corporal lingers.
Nervously threading
A scarf through her fingers

Husband? Or lover?
Or friend for the night?
Her face doesn’t tell
In the dim evening light.

The Squadron’s airborne
But still the WAAF lingers.
Nervously threading
A scarf through her fingers